Hey gang! Derek here. I wanted to have a little chat with all of you about CMEpalooza (Yes, again. I originally posted this in 2017, then again in 2018, but some people never learn.) Not the actual Fall event, mind you. Until we have the agenda totally set (we’re working on it), we don’t have much more to tell you about it, though Scott will undoubtedly have an update on our intern search soon (note from Scott: He’s right. I will).

No, what I wanted to chat about today is the continuation of a disturbing trend, and one that I want to try and bring to an end. I’m here to talk to you about the word “CMEpalooza.”

Here’s the thing — it’s”CMEpalooza.” It’s not “CMEPalooza” or “CMEPALOOZA” or “CMEpallooza” or…(ugh)…”CME palooza.” It’s one word with the first three letters capitalized. It’s a mash up of “CME” and “palooza.” It’s a palooza of CME. It’s CMEpalooza.

In one of the first emails Scott sent me when we first started working on CMEpalooza together, he referred to it as “CMEPalooza.” I responded to him with a threat of fisticuffs if ever he spelled it that way again. It’s one of the few arguments I’ve ever won with him. To be fair, most of our arguments rarely extend beyond this exchange:

Nonetheless, winning this argument was no great feat. Still, I even had “CMEpalooza” t-shirts made. See? 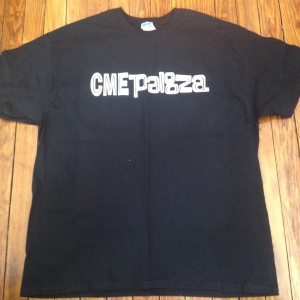 As someone who has his name misspelled more often than it is spelled correctly (Derek, Derik, Derrick, Dereck, Derick, Darek, Darik, Deric, Derk), I am perhaps a little oversensitive to the incorrect spellings. Still, CMEpalooza is my baby and a little piece of me dies inside every time I get an email asking me a question about “CME palooza.”

The moral of the story is this: it’s “CMEpalooza.” All one word, no capital “P.” The next person to write it wrong gets banned. From something. Not quite sure what, but I’ll figure it out.