Before Derek and I embarked on the launch of CMEpalooza nearly a decade ago – yes, it’s really been that long – we met with a cadre of lawyers to be sure we were appropriately protecting our intellectual property. We had seen too many professional presentations “repurposed” over and over in various venues, too many witty blog entries plagarized with impunity, too many sponsorship ideas stolen by competitors. We weren’t rubes – we knew with absolute certainty the impact that CMEpalooza was going to have on our little world, and we wanted to put up the appropriate legal barriers to anyone bold enough to challenge us.

There are lots of goings on within the world of CMEpalooza that the general public only catches a glimmer of. We speak about our rotating pool of crack interns from time to time in our blog, but these are really the people who make CMEpalooza hum along smoothly. Who else would scour local liquor stores to get Derek the Weller CYPB Bourbon that he needs to unwind on the porch every night? Who else would stand in line outside of the Philadelphia 76ers team store at midnight every October 1 to make sure that I got the limited edition jersey of every free agent signed by our beloved basketball team?

We put a lot of trust in our interns. Many of them have gone on to be some of the most influential people not only in CME, but in the broader educational world. Because of the sensitive nature of their duties during their time at CMEpalooza and our legal requirements for total secrecy, we don’t allow our crack interns to ever tell anyone that they even as much as stepped foot in our hallowed hallways. The best we are able to do is to give them a conspiratorial wink when we pass them in the hallways at the various “lesser” CME events where we frequently cross paths.

The last day of each intern’s time with us has always been something we have considered fairly special. We invite our team into our offices (Derek’s has photos of him with a goofy grin in all 50 U.S. states – impressive!), have them share all of the things they love and hate about CMEpalooza, and then they leave. Empty handed. That’s key to this story – our interns are not allowed to take anything with them. Not so much as a stapler. It’s not because we’re cheap (OK, fine, maybe we are), it’s not because we don’t trust people (OK, fine, maybe we don’t), but it’s because we don’t want to weigh down our interns with the weight of their past and instead allow them to focus entirely on their bright future (yeah, that’s it!).

All of which makes what I’m about to share with you so disturbing.

A few months back, Derek and I started hearing whispers about one of our former interns – let’s call her, I don’t know, Donna Grump. I honestly didn’t even remember much about Donna. I mean, we go through so many of the best and brightest that, after a while, the memories of some of our former interns start to run together. Was she the one who made fun of Derek for his signed photo of the cast of Small Wonder, or the one who chided me every morning when I whistled the theme to Silver Spoons in our hallways? You can see how it’s hard to keep these things straight.

Anyway, Donna apparently didn’t appreciate the legal responsibilities of her time as a CMEpalooza intern as much as she should have. First, it was a midnight phone call I got at home – Donna’s a thief! Then the scrawled note left taped to Derek’s keyboard – Donna can destroy you with what she ‘s stolen! Normally, we wouldn’t take these things very seriously, but let’s face it, we’re in a pretty sensitive time in our history so we figured it was time to pay Donna a visit. Good thing she only lives 2 blocks from me.

So I knocked on Donna’s door one morning to confront her. She seemed surprised to see me, backing up a few steps when she saw me on her doorstep. Her Rottweiler growled in the background.

I tried to be nice, set her at ease, make her think I was there for a simple “how do you do, chat” before getting to the heart of the matter.

SCOTT: “Hey there Donna, so nice to see you again. I heard that you may have something that belongs to us.”

She folded like a poker player with a pair of deuces in a game of 5-card draw.

DONNA: “I don’t know what you’re talking about. Oh, OK, fine, I’ll admit it. I stole Derek’s Facebook password. Here, take it. The dude is more boring than my great-grandfather, and he’s been dead for 23 years. I just wanted to post a few things to make it seem like he was more interesting than he really is, but no one believed anything I wrote!

And she slammed the door in my face. “Now go away!” she yelled at me.

Not wanting to cause further angst, I tiptoed back home and huddled with Derek.

DEREK: “I always wondered how that post of me talking about how much I loved the Barry Manilow concert last summer got there. It was Donna! Let’s call the feds!”

I calmed Derek down. The feds have enough on their hands right about now. We settled for a call to one of our own, CME Detective Jake Powers (you may remember Jake from here and here). Jake suggested a sting, a raid, a takedown. It sounded exciting. We were in.

JAKE (to us): That Donna is less honest than a three dollar bill. Her story has more holes that a slice of swiss cheese used for target practice. She’s guiltier than a cat burping canary feathers. She-

DEREK: We get it. She’s hiding something. Now what?

A few mornings later, when Donna took her dog out for a walk, Jake slipped in through the side window (it was unlocked – he doesn’t actually have any ability to jimmy locks or anything useful like that). And here is what he found in a folder on her kitchen table entitled – SECRET CMEPALOOZA DOCUMENTS THAT I WASN’T SUPPOSED TO TAKE AFTER MY DAYS AS AN INTERN. The photo quality isn’t great – Jake still has a flip phone. 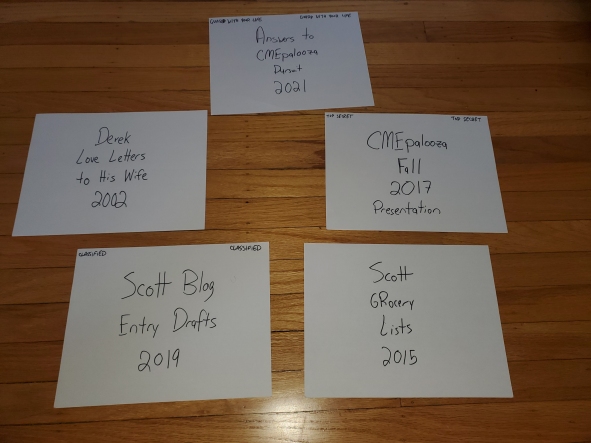 We had her… red handed. A few mornings later, with our lawyers in tow, we showed up at Donna’s house. But she was ready, too – apparently, Jake isn’t as sneaky as we would have liked. He left his business card on her table (when asked about this later, Jake admitted to us that business isn’t so good these days and he needs to always scour for new clients).

Donna greeted us with her own team of lawyers, who claimed that Donna’s privileges as a former CMEpalooza intern gave her the right to “declassify” any materials that ever came across her desk. Donna went on a social media tirade, claiming that this “raid” was nothing more than a ruse, a personal attack on her that was unprecedented in American history. She threatened retribution, saying that “Derek will never again enjoy his $1,300 bottle of Old Rip Van Winkle 10-year bourbon without looking over his shoulder.”

So why are we telling you, our loyal fans and followers of CMEpalooza, all of this today? Frankly, we’re tired of living in fear. We need more eyes and ears everywhere, to prevent Donna from tearing down everything that we hold dear. It’s going to be a bumpy few months folks. But together, we can get through this.

If game show hosts like Bob Barker, Wink Martindale, and Monty Hall taught me anything during my internet/cable/cellphone-free youth, it’s that a good host always builds suspense before the big reveal of the answers. With that in mind, two notes before I give the answers from Wednesday’s CMEpalooza Agenda Trivia:

Question 1
This article of clothing, made from PVC plastic and featuring numerous colors, was one of the biggest fashion hits of the 80s.

Question 2
This 1989 movie predicted that in 2015, the President would be a woman, cars would fly, and the Cubs would win the World Series. All were wrong.

Answer: Back to the Future II

Question 3
The 80s were weird. People would pay $2 a minute to dial these four digits (followed by a standard seven digit phone number) to listen to pre-recorded messages from Hulk Hogan, Paula Abdul, He-Man, and others (not to mention the various party lines and psychic options that were available.)

Question 6
This person dominated tennis during the 70s and 80s, winning 18 major singles titles, 31 major doubles titles, and 10 major mixed doubles titles, for a combined total of 59 major titles, the most in the Open Era.

Question 8
In 1984, a Mister Softee ice cream truck driver memorized the board patterns of this game show and won more than $100,000, record winnings at the time.

In honor of our newly released CMEpalooza Fall 2022 agenda (Wednesday, October 19!), I put together a little trivia game for everyone because, well, mostly because I was sitting around waiting for an email and needed something to do. Mind you, this is not trivia about the actual CMEpalooza agenda. No offense to our wonderful panel of speakers (we love you all!), but that would be pretty boring. No, this is is trivia focused on 80s (and a smattering of 70s and 90s) pop culture, because that is what we do here at CMEpalooza. We might not be good at a lot of things, but we are good at 80s trivia.

This is how it works: There are eight trivia questions, and the answer for each question relates in some way to one of the agenda sessions. For each question, you get 1 point for the correct answer and 1 point for naming the correct CMEpalooza session, for a total of 2 points for each question. Two of the trivia questions have two-part answers, so you get 1 point for each answer, plus 1 point for the CMEpalooza session, for a total of 3 points. There are a total of 18 possible points. (Note from Scott: “There was one for Mr. Body in the study, 2 for the chandelier, 2 at the lounge door, and 1 for the singing telegram. 1+2+2+1” – name the 80s movie for a bonus point. Math rules!)

This is all for fun, so there are no prizes and you can track your own answers. I’ll give you two days to think about it and then reveal the answers on Friday. Good luck!

NOTE: I just realized none of these are actually worded as questions. Whatever. You all know what we’re doing here. This ain’t rocket science.

Question 1
This article of clothing, made from PVC plastic and featuring numerous colors, was one of the biggest fashion hits of the 80s.

Question 2
This 1989 movie predicted that in 2015, the President would be a woman, cars would fly, and the Cubs would win the World Series. All were wrong.

Question 3
The 80s were weird. People would pay $2 a minute to dial these four digits (followed by a standard seven digit phone number) to listen to pre-recorded messages from Hulk Hogan, Paula Abdul, He-Man, and others (not to mention the various party lines and psychic options that were available.)

Question 6
This person dominated tennis during the 70s and 80s, winning 18 major singles titles, 31 major doubles titles, and 10 major mixed doubles titles, for a combined total of 59 major titles, the most in the Open Era.

Question 8
In 1984, a Mister Softee ice cream truck driver memorized the board patterns of this game show and won more than $100,000, record winnings at the time.